We must resist Israel’s war on British universities, David Miller 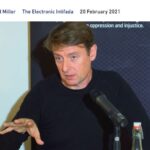 How Zionists dumb down western academia: The University of Bristol sacked pro-Palestine Professor David Miller following a sustained campaign from pro-Israel groups, even though they accepted that his anti Israel remarks did not constitute “unlawful speech.” Miller said the university’s decision was “designed to send a chill down the spines of academics around the world who expose Zionist racism.” Here Miller explains the organised Zionist attacks on British universities. The original post is here: https://electronicintifada.net/content/we-must-resist-israels-war-british-universities/32391

Britain is in the grip of an assault on its public sphere by the state of Israel and its advocates.

Meaningful conversations about anti-Black racism and Islamophobia have been drowned out by a concerted lobbying campaign targeting universities, political parties, the equalities regulator and public institutions all over the country.

Earlier this month, the newly elected secretary-general of the Muslim Council of Britain, Zara Mohammed, was set upon by two of the most energetic Zionist campaigners in British public life (Laura Marks and BBC presenter Emma Barnett) within days of taking up her position.

This month American commentator Nathan J. Robinson revealed how The Guardian fired him as a columnist for a mere tweet referencing US military aid to Israel.

At the same time, the celebrated film director Ken Loach was smeared by Israel lobby groups such as the Board of Deputies of British Jews, who attempted to prevent him speaking to students at the Oxford college where he studied.

And this week, Israel’s lobby in Britain has trained its guns on me.

In doing so, it is reviving its two-year campaign to have me sacked from the University of Bristol, where I teach political sociology, and in particular about corporate and state power, lobbying tactics and Islamophobia.

I established the UK’s lobbying watchdog, Spinwatch, which has spent 15 years tracking the nefarious effects of the fossil fuel lobby, the pharmaceutical lobby, the tobacco lobby, as well as state lobbies that promote Islamophobia, such as those of Israel and the United Arab Emirates.

And it is this exposure of Zionist Islamophobia that most terrifies Israel’s fanatical advocates, particularly as the Israel lobby repositions itself from defending against accusations of Israeli war crimes to an offensive designed to rebrand Zionism – absurdly and ahistorically – as a “Jewish liberation movement.”

Israel and its apologists internationally are particularly sensitive to their ideological Islamophobia coming under scrutiny now.

That’s because in recent years, they have shifted their strategy – from relying on dry diplomatic talking points about the delineation of Israel’s borders or defending the Zionist terrorism that led to Israel’s establishment to talking almost exclusively about feelings and identity.

Criticism of Zionism or Israel “hurts their feelings,” “makes them feel unsafe” or “uncomfortable in this space.” A newer fad is to dispute the idea that white European Jews are white at all.

And of course, there’s the time-honored tactic of smearing any critic of Israel or Zionism as an “anti-Semite” or a “self-hating Jew” on the basis that Zionism is somehow a facet of Jewish identity rather than a racist, modern political ideology with secular origins premised on ethnic cleansing and anti-Arab racism.

The purpose of all this is to give cover to Zionist activists, allowing them to present themselves as part of a benighted ethnic minority facing racism when criticized and to mobilize those who would never previously have “come out” as Zionists to do so, all the while feeling virtuous about it despite the bloodshed they would be advocating.

Given the size of Britain’s Israel lobby and the extent to which it has already penetrated public institutions, this naturally has the effect of minimizing and sidelining genuine concerns about anti-Black racism and Islamophobia as well as shouting down the ways in which the state of Israel is deeply engaged in promoting both of those types of racism.

That’s the point of the anti-Semitism smear tactic, not just an incidental consequence.

But the facts about Zionism’s endemic anti-Arab racism, which began with the ideology’s founders, or about the sheer scale and prominence of funding from Zionist movements for Islamophobic causes, sits ill at ease with the desire of Israel’s lobbyists to play identity politics.

Since 2011, pro-Israel activists have attempted to smear me personally.

This began when I testified as an expert witness in the trial of Sheikh Raed Salah, a Palestinian religious leader who was arrested after landing in the UK, where he was due to speak at a Palestine Solidarity Campaign event alongside several Labour members of Parliament.

My evidence in the trial showed that the Community Security Trust – one of the UK’s major Israel lobby groups which had secretly passed inaccurate “evidence” about Sheikh Raed to the UK government leading to his arrest – had ulterior motives in the case.

The CST and the broader lobby’s mission was to paint Sheikh Raed as “provocative” and an “anti-Semite” in a bid to have him banned from the UK, thereby instilling fear in pro-Palestinian campaigners, Arabs and Muslims.

In the intervening years, several far-right, pro-Israel blogs and media outlets have jumped on the bandwagon, publishing untrue allegations about me and distorting my public statements.

This included the renowned anti-Muslim hate site, the Gatestone Institute, which is run by Nina Rosenwald, one of the super-donors fuelling the rise of Islamophobia globally.

The irony is not lost on me – these disinformation efforts emerge precisely because I teach about propaganda campaigns and the harms they cause.

Over the past five years, with the rising popularity and effectiveness of the anti-Semitism smear after the Labour Party’s capitulation to the tactic, Israel’s apologists have been emboldened to intensify their use of it on university campuses.

In February 2019, I delivered a lecture for a course I teach at Bristol explaining the five pillars theory of Islamophobia.

The theory details the mechanisms by which certain states, far-right movements, the neoconservative movement, the Zionist movement and the liberal New Atheist movement promote Islamophobia.

Within weeks, the pro-Israel Community Security Trust complained to Bristol university about the inclusion of the Zionist movement in my teaching.

This was followed by a complaint to university authorities against me drafted by the Union of Jewish Students, a group revealed in an undercover Al Jazeera investigation to be funded by the Israeli embassy in London.

The UJS oversees the UK and Ireland’s university Jewish Societies (JSocs) and its constitution states that it expects its members to make “an enduring commitment” to Israel and that “engagement with Israel” is one of its “core values.”

The UJS itself operates under the umbrella of the World Union of Jewish Students, which is affiliated to the World Zionist Organization.

The UJS acts as a gateway to British politics for the most hardcore pro-Israel campus warriors, grooming student activists for jobs in the Israeli embassy in London which it helps to arrange.

But the UJS appears to have been concerned that if it was discovered to have led the campaign to have me sacked, the charade of false anti-Semitism allegations could possibly be found out.

The lobby is keen to maintain the fiction that its campaign of subversion on British campuses on behalf of a violent foreign regime is the work of independent students who are genuinely distressed.

The lobby has been very clear. It wants me sacked and has been trying to achieve this for two years.

Because of a failure of Britain’s institutions – political parties, media outlets, universities and public bodies – to properly investigate and understand how Israel’s lobby works in practice and their failure to reject the tactic of manufacturing “anti-Semitism” scandals as a cynical ploy, we are now in the position where fanatical advocates for one of the most dangerous states in the world attempt to demand a veto on who teaches in our universities.

There can be no doubt, too, about the threat Israel’s campaign of censorship poses to Arab and Muslim students, who are silenced from expressing how the racism that targets them actually works.

Bristol university has seen several shocking racist incidents unfold in recent years, including far-right posters plastered over its campus and an event co-hosted by the Zionist Pinsker Centre at which the guest speakers included the proudly Islamophobic former British army colonel, Richard Kemp.

Also speaking was Yossi Kuperwasser, the former “head of research” of Israeli military intelligence and former director general of the Ministry of Strategic Affairs, the department in charge of overseeing manufactured anti-Semitism allegations internationally and of targeting pro-Palestinian activists around the world.

The Israel lobby’s attack on me lays bare what is actually going on – a weaponization of bogus anti-Semitism claims to shut down and manipulate discussion of Islamophobia.

But the lobby’s tactics are only so effective because they are rarely challenged. It is time for those who are concerned about Islamophobia, racism and academic freedom to make their voices heard.

David Miller is the co-editor of the book What is Islamophobia? Racism, Social Movements and the State. 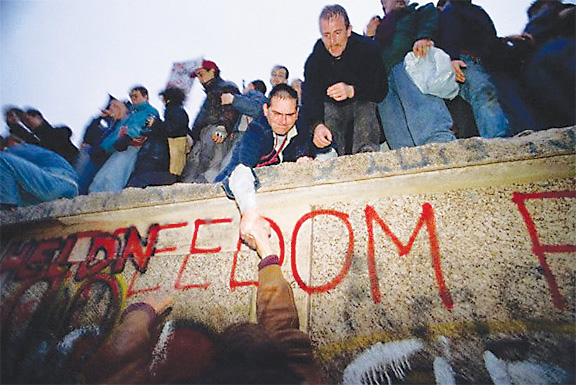 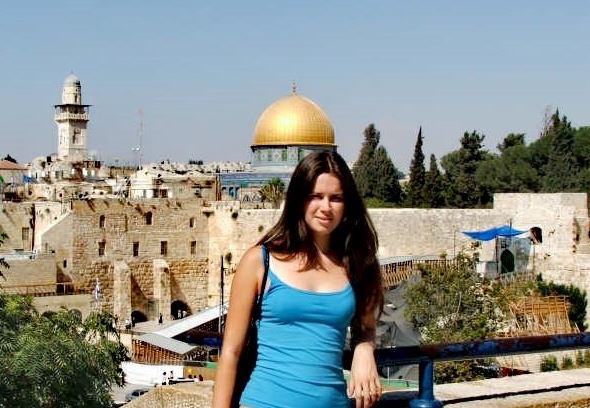 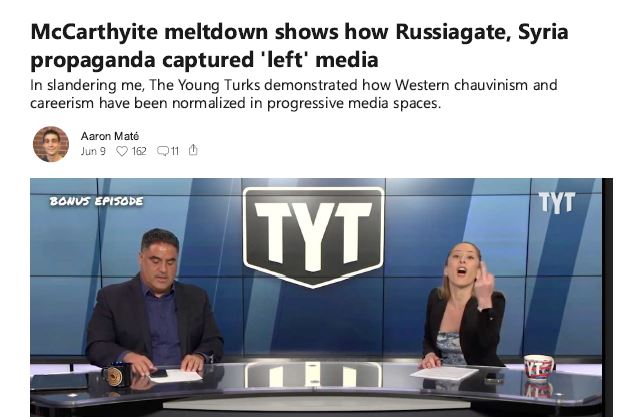 Aaron Mate: on Syria and the capture of US liberal media