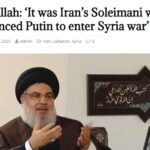 Hezbollah Secretary General Sayyed Hassan Nasrallah recounts how assassinated Iranian General Qassim Soleimani held a two-hour long meeting with Russian President Vladimir Putin and convinced him to militarily enter the war in Syria in support of the government in Damascus and its allies.

Did martyr Qassim Soleimani really meet Russian President Vladimir Putin, and talk to him in person about the deployment of Russian forces to Syria?

That is correct. There had been discussions before (regarding this issue). As you know, before its intervention (in Syria), Russia maintained a (purely) political stance. It initially started as a political stance. Russia would use its veto power in the Security Council to defend and protect (Syria). It would provide help in logistical and intelligence matters, but (its support) never got to the point of establishing a (military) presence (in Syria).

Anyway, the shifts in the battle in Syria began only in the second year (of the war). The curve (showing the authority/position of the Syrian government) was descending in the first year, but by the second and third years, the curve began to ascend.

However, of course, the battle would have dragged on …

(The battle) would have dragged on for much longer than it did (if not for Russia’s intervention). Therefore, Russia’s military intervention (in Syria) was highly important. We cannot deny that.

That day (when Soleimani went to Russia), Russian President Putin was hesitant, and as you know Russia was virtually besieged (at the time). It had (no influence) in the region i.e. in the Middle East. (The US) even stripped Russia (of its influence over) Eastern European states. One after another, (certain) states that neighbored Russia and were inside its sphere of influence were taken over by America.

Regardless, (the Russians) were concerned about this decision (intervention in Syria) as it could either be a risky step that was doomed to fail, or one that might achieve success. As a result, it was not a political discussion that would convince (Putin) but rather a military discussion.

At the time, after coordination between Iran and Russia, our brother Hajj Qassim (Soleimani) went to Moscow and met with President Putin for two hours – the length of the meeting is important. A number of relevant military, security and political officials were present (at the meeting as well). Hajj (Qassim) told me this (information) himself…(I heard this) directly from him, not through word of mouth. He said, “I spread the maps out on the table and (started talking about): the current situation, our location/positions (and by ‘our’ he means the Syrian army and all its allies), the location/positions of the armed groups, the opportunities for (military) action, and the chances of success”.

(In this meeting) he (Soleimani) presented a (comprehensive) strategic report to (Putin) on the situation in Syria and the region, (and explained) the proposed idea and the expected results. Of course, (in the meeting) he used a scientific, objective, military and battlefield language, (and based his statements) on maps, land areas, numbers and statistics. At this meeting, President Putin said to Hajj (Qassim): “I am convinced”, and the decision (for a Russian military effort in Syria) was made. This what I heard from Hajj Soleimani, and it is (now) well-known by everyone.

So can I say that the Russian intervention (in Syria started) with an Iranian initiative in consultation with Damascus, or at Syria’s request?

– Sayyed Nasrallah: It was at Syria’s request. (Syria) wanted (Russia) to take part (in this war).

– The Host: So Syria did not directly ask (Russia to intervene)?

(Syria) never asked Russia (to intervene)? I don’t know, but I suppose it did. That would be the obvious choice because there was an actual need…

… there was an actual need for help. Mr. Ghassan, there is a leadership, a regime, a country that is facing global war, so it would be normal (for Syria) to ask Russia for help. Russia was hesitant to intervene. The Syrian and Iranian discussions…

Look, I am somewhat objective and rational. I do not like to create myths. It is not accurate to say that Hajj Qassim Soleimani (alone) is the one who convinced Putin to intervene (in Syria). I prefer to say that through his strategic reading (of events), argumentation, compelling logic, and charismatic personality, Hajj Qassim Soleimani was able to provide an outstanding addition to all the previous efforts that led Russia to take the decision to come to Syria. Great efforts were made (before) and many discussions were held, yet President Putin reportedly remained hesitant.

Hajj (Soleimani) was able to persuade (Putin). As you know, he was skilled in (the art of) persuasion and had (impeccable) logic . He did not shame Russia into (joining the war), nor did he use (empty) rhetoric. Not at all. He used a scientific language, as he explained the (possible) military and battlefield outcomes, as well as the political outcomes for the (Russian) intervention (in Syria).

I believe that today – following the (Russian) intervention in Syria and the major regional and global transformations – Russia, President Putin, the Russian people and everyone knows that Russia found its way back to the international arena through the gateway of Syria.