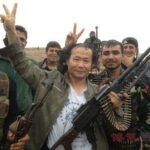 “Uyghur Muslim violence in Xinjiang, China, has two justifications—ethnic separatism and religious rhetoric. The Uyghurs, who reside throughout the immediate region, are the largest Turkic ethnic group living in Xinjiang and are overwhelmingly Muslim. This combination of ethnicity and religion also involves the movement of religious and political ideologies, weapons, and people. There is no single Uyghur agenda. Groups that use violence desire a separate Uyghur state. While some Uyghurs want a separate state, others want to maintain cultural distinction within an autonomous relationship with China, and others are integrating into the Chinese system.”

Countering Terrorist Propaganda, by the Foundation for the Study of Democracy

The mirage of sovereignty and the ‘white man’s burden’: the media in contemporary imperialism against Syria (RP 3/17)