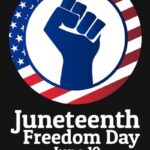 Juneteenth has become the latest iteration of liberal capture of Black politics, opportunistic virtue signaling, and the intentional misrepresentation of America’s history.

“An opportunity to discuss resistance against oppression has been turned into a substance-free feel good day.”

Juneteenth was largely a regional holiday celebrated by Black people in Texas and other southern states. It commemorates the events of June 19, 1865, when Union troops arrived in Galveston and announced that slavery ended as per General Order Number 3. “The people of Texas are informed that in accordance with a Proclamation from the Executive of the United States, all slaves are free.” It is an important event that ought to be remembered, but its true significance has been lost. Juneteenth has become the latest iteration of liberal capture of Black politics, opportunistic virtue signaling, and the intentional misrepresentation of America’s history.

Corrupt and avaricious corporations honor Juneteenth and cynical politicians give it great attention. There are calls to make it an official federal holiday. Unfortunately, the most common narratives of the Civil War are fraught with lies meant to give dispensation to bad actors of that era and to sanitize awful truths.

Abraham Lincoln’s Emancipation Proclamation went into effect on January 1, 1863 and is one of the most misunderstood documents in history. Lincoln was far from the great emancipator of the American imagination. In the early days of the war he ordered that enslaved people who escaped to Union lines be returned to their slaveholders. His goal was to accommodate the southern states as much as possible and keep them, and their peculiar institution, in the Union. Only rebel intransigence and the determination of the enslaved to be free changed his plans.

“Corrupt and avaricious corporations honor Juneteenth and cynical politicians give it great attention.”

Lincoln wanted to prevent slave holding states Delaware, Maryland, Kentucky, and Missouri from seceding. That is why the Proclamation freed only those people located in states that had already seceded, that is to say under Confederate control, which made it practically meaningless as a tool of emancipation. The Proclamation also exempted those areas of the Confederacy which were already under Union control.

He also insisted that the little emancipation that he offered be tied to colonization , the relocation of Black people outside of the country. It is rarely mentioned that he signed such a colonization plan on December 31, 1862, the day before signing the Emancipation Proclamation. A group of 500 “contrabands” were sent to Île à Vache, a small island off the coast of Haiti, in 1863. They were ravaged by hunger and disease and only 365 survived when they were rescued in 1865.

The insistence on continuing this pro-Lincoln mythology has turned the Juneteenth story into a nonsensical fairy tale. We are told that enslaved people didn’t know the war had ended and didn’t know they should have been freed until the Union army arrived in Texas.

“The Proclamation freed only those people located in states that had already seceded.”

Of course, Texans of all races knew that Robert E. Lee surrendered his armies in April 1865 and they knew that Lincoln was assassinated shortly thereafter. They had newspapers and the telegraph and letters from those who left the battlefield. Enslaved people were aware of anything that white people knew. They overheard conversations and saw white soldiers returning home. Some were on the battlefield as laborers in the Confederate army. The official announcement only confirmed what they already knew.

The explanation of the late announcement is very simple. Texas is further west and was off the beaten path of the Union army. It took them two months to establish their victory and send troops to Confederate hinterlands. It is also not surprising that the slaveholders wouldn’t free anyone until they absolutely had to. There was no one able to enforce Lincoln’s two-year old decree and they simply went about business as usual, squeezing the last ounce of forced labor out of their human chattel while they had the chance.

Juneteenth is an opportunity to tell the history of the enslaved people who freed themselves when they could and joined the army to form the United States Colored Troops (USCT). The untold importance of the Emancipation Proclamation is that it established the right of escaped people to join the army. Frederick Douglass and others pleaded with Lincoln for two years to arm the people who had the greatest stake in the outcome of the war. Juneteenth is an opportunity to debunk and demystify.

“Texans of all races knew that Robert E. Lee surrendered his armies in April 1865 and they knew that Lincoln was assassinated shortly thereafter.”

Any effort to make Juneteenth a national holiday should be viewed with caution. Such a designation would only continue the telling of false tales. It would allow the bad actors of the present day to get away with cheap theatrics while continuing the legal and economic structures which still oppress Black people. The true story of the past would be kept hidden and the story of the present would be sugar coated.

Juneteenth was a big event in the segregated south, a people’s holiday. That is how it should remain. Corporations which work against the people’s interests should not be allowed to absolve themselves by engaging in performative acts. Politicians who aid them at every turn should not be permitted to utter Juneteenth platitudes and create a new public relations farce. An opportunity to discuss resistance against oppression has been turned into a substance-free feel good day.

Black people don’t need governmental or corporate acknowledgement in order to tell their stories. In fact, learning history for our own sake is of paramount importance. Juneteenth can be the starting point for further study. Let Juneteenth remain a commemoration with significance for ourselves. Doing otherwise inevitably leads to confusion.

Margaret Kimberley’s Freedom Rider column appears weekly in BAR, and is widely reprinted elsewhere. She maintains a frequently updated blog as well at http://freedomrider.blogspot.com . Ms. Kimberley lives in New York City, and can be reached via e-Mail at Margaret.Kimberley(at)BlackAgendaReport.com. 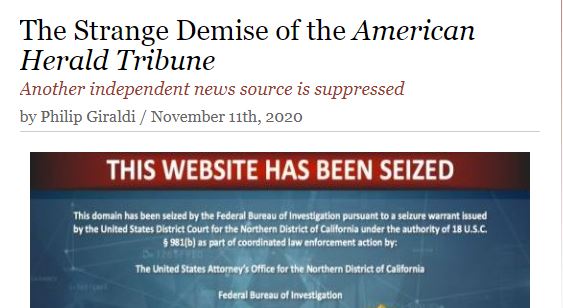 The Strange Demise of the American Herald Tribune, Another independent news source is suppressed, by Philip Giraldi