Lebanon: The Paradise from Hell , by Jeremy Salt 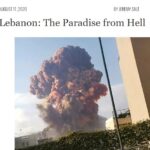 A compact history of how the colonial powers created a divided Lebanon , the partisan Special Tribunal for Lebanon STL , the Beirut port explosion and the role of Israel in the country’s miseries.

“Lebanon remains trapped in the mire of 1943. It is not a change of government that is needed but a change of the system and a change in the mentality of the Lebanese people so that they uniformly put their country ahead of sectarian loyalties. The old system needs to be torn up by the roots. Otherwise this blood-soaked cycle is never going to end.”